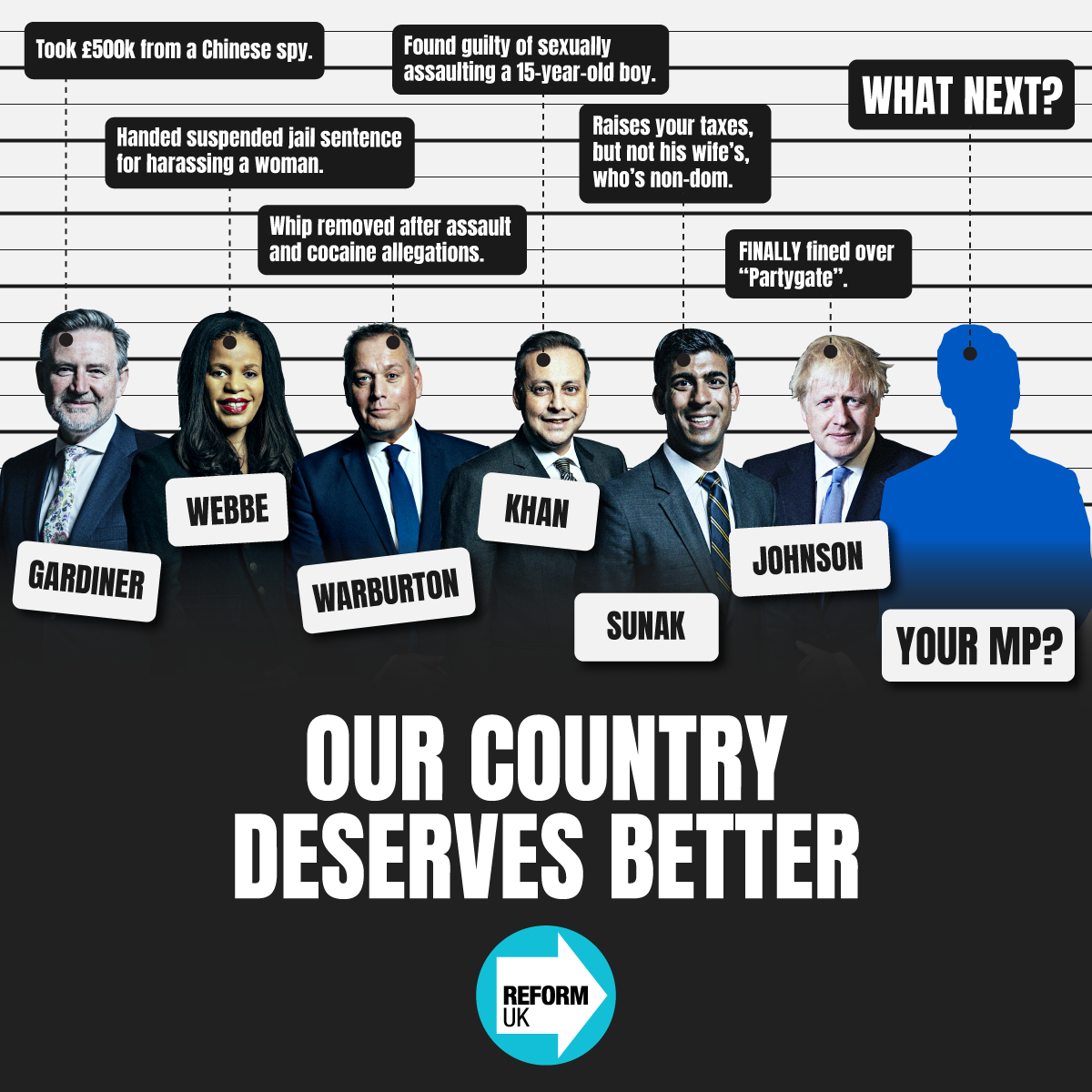 Barely a week passes without yet another scandalous story of Westminster sleaze and corruption, involving everything from rule-breaking, tax dodging and inappropriate lobbying to drug-taking and sexual assault.

Even the Conservative-supporting Sunday Times now asks, ‘Is this the sleaziest Tory Party yet?’

It’s time to replace the sleaze-merchants and careerists who believe in nothing more than their own re-election. We need a new sort of MP, capable men and women who will stand with the people and stand by their principles.

In short, we need MPs like you. That’s why I am asking you this Easter weekend to consider applying to stand as a Reform UK candidate at the next general election.

The rot in Westminster starts at the top. Prime Minister Boris Johnson has been fined for rule-breaking in the ‘Partygate’ scandal, which exposed how Downing Street believed that its punitive lockdown rules were only for the ‘little people’, not for those in power.

Now Tory Chancellor ‘Dishy’ Rishi Sunak, the party pin-up touted as Boris’s heir, has become mired in scandal. While he imposes tax increases on working people and ignores the crippling cost-of-living crisis, we learn that he did not increase taxes on his wife, who has been living in Downing Street relatively tax-free by enjoying non-dom status.

And let’s not forget the shocking supporting cast of sleazy Tory MPs and former MPs. They include Owen Paterson, disgraced lobbyist for big business; David Warburton, infamous overnight after posing for photographs with lines of suspicious white powder; and now Imran Ahmad Khan, convicted of sexually assaulting a teenage boy. Khan even tried to ban media coverage and hide his sex crimes trial from the public.

Before the Labour Party tries to claim the moral high ground, we might also recall its own recent list of shame. Claudia Webbe MP was convicted last year of harassment, and senior Labour MP Barry Gardiner has confessed to receiving donations of some £500,000 from a Chinese spy.

Yet nearly all of these shamed politicians nevertheless still sit as Members of Parliament, drawing public salaries and voting on important laws.

Where is the integrity that we have a right to expect from our leaders and elected representatives?

Millions voted Leave in 2016, and for Boris in 2019, to ‘take back control’ from the unaccountable EU bureaucracy. We didn’t win Brexit to hand back control to a Westminster clique of self-interested, shameless charlatans.

We want to reform our economy, by cutting taxes hard to encourage growth and removing the 25% of your unaffordable electricity bills that go towards green subsidies.

And we want to reform our politics, by tackling the unelected cronyism of the House of Lords and making parliament more representative of the people.

We are making big strides. But we can only succeed with your support. It’s time for Reform.

I hope you’ll decide it’s time for you to join the fight to change politics for good, by standing as a Reform UK candidate.